Quote from the movie Ruthless People: "Bigger is not necessarily better"

When selecting the correct size for a QR Code, its not only the physical size that needs to be selected.
With the physical size I mean the actual size in squire inch (or centimeter) room that is reserved for printing the QR Code.

QR Codes are available in various versions (grid sizes), and 4 error correction levels. You would assume that the highest error correction setting would be best choice to guarantee a working code. But is it?
There is a big chance that by selecting the highest error correction level, also a bigger version, and therefor a bigger grid size needs to be selected for the content to fit the code.
Since the total grid size will be scaled down to fit the physical dimensions as mentioned before, the resolution of the total code will degrade, thereby increasing the risk of hard to read or unreadable QR Code.

The surface where the code will be printed on will also an effect on readability. A code placed on a folder will be easier to scan than a code printed on a plastic bag.


The quality of a Custom QR Code can be degraded by three basic factors:

Error correction since part of the code is usually replaced by a graphic.

Resolution due to compensation for the placed graphic.

Contrast due to the use of colors. 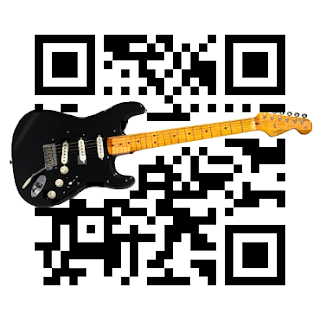 When placing a graphic in a QR Code, the color of the graphic will reduce the contrast, a lot of the potential errors due to this placement can be reduced by selecting a best overall fit for the graphic in relation to the elements (grid points) involved. By a slight shift of the picture and/or some retouching it can be avoided that a single grid point is 50% dark and 50% light.

Geplaatst door Kangaderoo op 12:28 AM
Email ThisBlogThis!Share to TwitterShare to FacebookShare to Pinterest