Quote from the movie TRON: Legacy: "After the Purge, I needed to reinvent myself."

Back to the drawing-board is what they must have thought at Ubleam. A french based company that clearly seen the benefits of smartening your marketing by use of 2D scan-able codes.
The first generation of scan-able codes had their focus on making a printable tag with the emphases on capacity. To secure readability of this high capacity error correction is needed, requiring even more capacity. 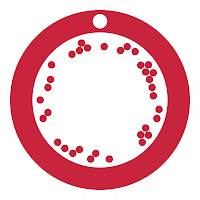 The 2D code needed to be reinvented, with other targets in mind. Graphically more appealing by itself, keeping the most important visual location i.e. the center, free for graphical enhancement like customer specific branding.
Since today's smart-codes are mostly used online, some 'intelligence' that is placed in a standard QR Code can also be moved to the reader. By this action the capacity requirement could be heavily downsized. Ubleam codes are using only 80 data-point. This means that the content of a generic code is only a tag and some error correction. When the code is scanned this tag is then send to a central database, retrieving the actual link.
More or less the same action as using a URL shortener, where in this case the URL of the shortener is already fixed in the reader.

On their website Ubleam states that their code is a 3D code. This had me wondering for a minute as well, printed on a flat surface we only see two dimentions; height and width. It is actually a reference to the technique needed to find and read the code. Bleam codes claim to have the best scan-ability compared to other 2D codes with regards to distance, scan angle and rotation of the camera in regards to the code. Since this aspect is clearly linked to the depth dimension the 3D claim can be considered valid. High scan-ability under various conditions, is a mayor plus when targeting a mobile audience.

You could call this code a 4D code, since they claim to be the fasted scanning code, and time being a dimension.
Customization of the complete code, thus including alignment and data-points, is also possible, just as with older generation 2D codes, resolution and contrast are key to keep the code functioning.

Ubleam is right that the 2D-codes needed to be reinvented for optimal use in advertizement and marketing. Though I would have liked just a bit more capacity in the code, giving the possibility to put an actual (shortened) URL in the code. By using a tag with a central database the code is less open source, good for code security; the tag  being created in two places, in the code itself and in the database, bad for companies like mine that bend the specifications a bit to obtain maximum graphical enhancement.
The code itself is dynamic, at the database site a new URL can be linked to the tag, a plus for re-usability. Having their own reader that also supports QR Code, where there is all-ready a multitude of readers for other 2D codes is a hurdle they have to take. A plus is that the Ubleam reader does also support QR Code.