I received a twitter message with the tweet "USD professor develops invisible QR codes", the article's can be found here. Reading the tweet and the article the first thought in my mind is why? Why make invisible QR Codes? A quick google scan on the key words "invisible qr code" gives me about 2.6 million results. It seems like the consensus is that QR Codes are ugly. Beauty seems to be in the eye of the beholder.

I just wonder, what is one of the biggest pluses of a QR Code? It is recognizable! I would guess that anyone with a smartphone would know what to do if they see a QR Code. But if I cannot see the invisible code what would make me take my phone out and scan at the right location?
You'd have to accompany the invisible QR Code with some kind of scan here indicator. An indicator pointing to.... still something I cannot see?


The question I still can't answer is "What would compel me to scan a invisible code?"
If anyone has the answer to this question, scan the code below and share your thoughts.

Is there a market for invisible QR Code's? I guess there could be. Marking products invisible against shoplifting or marking products for traceability in case of warranty could be useful. With only a limited group of people knowing where to scan; the product itself does not need a permanent visible mark. 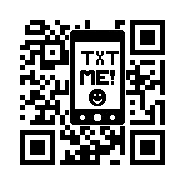 But when using QR Codes as a marketing tool, it should be visible, calling attention to be scanned, giving a clear reason why it should be scanned. In this case visibility is key! There are several way's to enhance the QR Code visibility.

The visibility and the giving the reason why to scan the code can also be combined in a single QR Code.

If this code was part of a commercial campaign, and I was interested in the offer of the campaign, I'd guess I would scan the code and expect by doing so a text message would be send.
If you require your own error free fast scanning visible QR code, containing your own graphic, don't hesitate to visit http://www.kangaderoo.nl to see more examples of what is possible with QR Codes.
Geplaatst door Kangaderoo op 7:09 PM
Email ThisBlogThis!Share to TwitterShare to FacebookShare to Pinterest