Quote from the movie Four weddings and a funeral: "I think we both missed a great opportunity here."

I just read a couple of interesting QR Code applications that hit the news the last couple of day's.
One was of QR Codes being placed on tombstones and the other was using QR Codes in obituary's.
The fact that both are related to death is a coincidence. It just proves that the QR Code itself is very much alive and in these examples performing an invaluable addition.

In these examples the QR Code is used to generate a link to additional information. The location where the code is placed is limited in printing space. Where a whole  live story can be easily be hosted online using a qr code linking to this content. 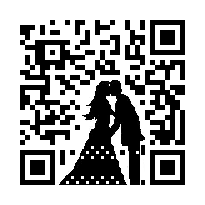 The same setup can be used for all kinds of invitations. The room for text on an invitation is usually limited. The QR Code can be a link to an online page, that only invitees can access; maybe even add their own content.

An example that springs to mind is a wedding, were guest have access to a website providing information about bride, groom; and where guest can drop their own story and or photo's.
Using a Custom QR Code that is graphically in line with the invitation itself is an opportunity that should not be missed.